Malala Yousafzai made history back on October 10, 2014. The 17 year-old Pakistani youth activist was awarded the Nobel Peace Prize – making her the youngest recipient of the award ever. Now, what made her earn this award you ask? Well, here is Malala’s story-

Born on July 12, 1997 in the Swat District (a town) in northwest Pakistan. The Taliban had, and still has, a strict control over her valley (and of course many other regions as well), and she, along with her family and friends, were under constant threat. Despite this, Malala wanted to speak out about her experiences, and offer a voice for her community. So, in 2009, when she was only 12 years old, she began writing an anonymous blog for the BBC (British Broadcasting Corporation) about her struggles as a Pakistani youth.

However, as time went on, the Taliban began getting a stronger control of Swat – even stronger than they already had. The Taliban began placing many restrictions, especially those who were female. Women and girls were no longer allowed to receive education orgo to school – they weren’t even allowed to go shopping! Further bans on things ensued, such as on music, television, wearing brightly colored clothing. If you were to break these rules, you must expect the most vicious of punishments (whipping, beating, and even execution.)

Yet, despite these threats looming over Malala’s young head, she continued advocating for her cause. Her family was exceptionally worried, and wanted her to stop her anonymous writings, but she refused. Instead, she stated:

“How can we do that? You were the one who said that if we believe in something greater than our lives, then our voices will only multiply ever if we are dead. We can’t disown our campaign!” (I am Malala, pg. 188)

Writing about her experiences with the Taliban wasn’t the only way Malala defied them. She, along with many girls, went to school secretly. It was a fully functional school, and was even founded by Malala’s father before she was born. It was called “Khushal School.” It was fully functional, with lesson plans, whiteboards, exams… They were no different than here ( however, they did get to get up later than us…) Six mornings a week, Malala and her classmates would wake up around 8 o’clock, and either walk or be driven to the unmarked building (the school had no sign for safety measures), where upon entering they would cast off their head scarves and run about, before beginning their lesson.

Later, in December of 2009, her identity was revealed on her BBC blog. Before, she used a fake alias, and went by “Gul Makai.” Many of her activist themed activities became public after that, including a documentary that she was featured in, called Class Dismissed. She also received the first National Youth Peace Prize in 2011, and was nominated for the International Child’s Peace Prize. With her heightened profile and attention, the Taliban made the executive decision to kill Malala, as her activism had reached out to too many people, and had gone too far.

Thus came the fateful day, October 9, 2012. Malala and her friends were on their school bus, heading back home after a day of good education and learning. But the bus is stopped in the middle of the street. A member of the Taliban boarded the bus and angrily asked: “Which one of you is Malala? Speak up, otherwise I will shoot at you all.” The girls on the bus mistakenly looked towards her automatically, thus giving away her location. The gunman fired three times. 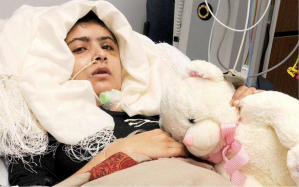 Malala was only hit once, as the two other bullets missed her and hit two other girls (who sustained only mild injuries). The bullet that did hit her however, only narrowly missed her brain! Overwhelming support reached out for Malala once news of the shooting reached the world, and many places offered their care and treatment for her. After being transferred to a few hospitals, she was finally flown to the Queen Elizabeth Hospital in Birmingham, England. There, she stayed for treatment until she was discharged on January 3, 2013. Just about a month later in March 2013, she was able to start going to an all-girls’ school, Edgbaston High School! And before you know it, it was July 12, 2013, her birthday, and she was spending it at the UN headquarters in New York, where she addressed youths about the importance of education.

“One child, one teacher, one book, one pen can change the world,”

A year after her attempted assassination, Malala’s autobiography I Am Malala: The Girl Who Stood Up for Education and Was Shot by the Taliban, was released on October 8, 2013. Along with this book, Malala also launched a petition in her name, also using the slogan, “I Am Malala.” The demands listed in the petition are: Malala certainly changed the world. Because of her activism, how she was able to shed light on education in Pakistan and promote rights to education for all people, in 2013, she was named one of the Times Magazine’s most influential people in the world, and was casted as a nominee for the Nobel Peace Prize. And on October 10, 2014, she became more than just a ‘nominee’ – she actually received it! The name ‘Malala’ was heard everywhere after she accepted the award, and showed great promise for her campaign for worldwide access to education. Malala on the cover of TIME Magazine

Controversy: Many in Pakistan fear the West’s support of Malala is hypocritical given the US drone strikes on Pakistan and Afghanistan. Malala also speaks out of how she disagrees with the drone attacks, yet she is constantly overlooked/ignored when it comes to that subject. 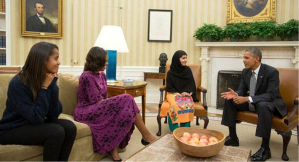 Malala with the Obama family

(When asked what she would say to Taliban gunman, if she had the chance)

“I’ll tell him how important education is, and that I even want education for your children as well. And I would tell him, ‘That’s what I want to tell you, now do what you want.’”

“The terrorists thought they would change my aims and stop my ambitions, but nothing changed in my life except this: weakness, fear and hopelessness died. Strength, power and courage were born.”

“If you hit a Talib with your shoe, then there would be no difference between you and the Talib. You must not treat others with cruelty and that much harshly, you must fight others but through peace and through dialogue and through education.” 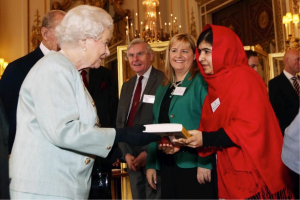 One response to “Malala Yousafzai – The Girl Who Could”